The school took place from 30 August to 1 September with a fully online format. There have been two courses focusing on

The need, the challenge and the success of

The lectures on robust optimization were delivered by Aharon Ben-Tal, on nonsmooth optimization by Manlio Gaudioso. Each of the three days included a 2 hour lecture for each course with the following timetable: 10 am-12 pm and 2-4 pm CEST.

The school wass organised with the support of the International Centre for Mathematical Sciences (Edinburgh, UK).

Attendance was free of charge but with a mandatory registration. Lectures are particularly suited for PhD students and young researchers to provide them with the chance of  attending two high level courses on continuous optimization, but  the school was open to everyone wishing to participate. The videos of the lectures can be streamed online as they are hosted on the Media Hopper Create platform of the University of Edinburgh.

Robust Optimization: the need, the challenge and the success

The Need: Optimization problems are affected by uncertainties, either due to inaccuracy in measurements, lack of timely information on values of parameters (which incurs estimation errors), and limitation on executing accurately a computed solution (causing implementation errors). Due to these uncertainties a solution may divert from the expected optimality, and even worse; can lead to infeasibility. Consequently, there is a great need to come up with a method that can address the above difficulties.

The challenge is to introduce a methodology which on one hand will not impose on the user of the optimization the need to provide information on the uncertainties, which he cannot deliver, and on the other hand will not impose on the optimizer the need to solve intractable optimization problems, in particular dynamic (multi-stage) ones. Robust Optimization (RO) is an attempt to meet these challenges. The talks will explain and demonstrate how this is achieved.

The success: RO created a new branch of optimization theory; this is evidenced by huge number of publications addressing topics in RO. What is even more impressive is the large number of diverse applications of RO (Google Scholar lists over 234,000,000 items when one clicks “application of robust optimization”!).

Nonsmooth Optimization: the need, the challenge and the success

Nonsmooth optimization (NSO) is about objective functions which exhibit kinks, that is discontinuities in the derivatives. Although smoothness is commonly present in many functions describing real world decision making processes, an increasing number of modern applications are inherently nonsmooth. The worst-case analysis approach is the most common source of nonsmoothness, leading to problems of the minmax, maxmin or, even, minmaxmin type. Other NSO problems arise in decomposition of large scale problems, in solving integer or mixed-integer programs, in handling variational inequalities, bilevel optimization, game theory problems etc.

The need for NSO methods comes from the observation that convergence to a minimum of the algorithms designed for smooth optimization is not guaranteed when they are applied to NSO problems. The course will present the basic mathematical tools (subgradients, subdifferential, generalized gradient) used in numerical NSO, both in the convex and in the non convex case. Then the most popular algorithms will be discussed, focussing on the methods based on piecewise linear approximations of the objective function.

The challenge and the success of NSO methods will be discussed in two modern frameworks: the solution of integer programming problems via the Lagrangian relaxation approach (in application areas such as Logistics, Sensor Location and Network Design); the models for Classification problems in Machine Learning (Separation of sets via non linear surfaces, Multiple instance Learning and Feature Selection via Sparse Optimization).

A view of Lagrangian relaxation and its applications

Aharon Ben-Tal is a Professor of Operations Research and former head of the MINERVA Optimization Center at the Faculty of Industrial Engineering and Management at the Technion – Israel Institute of Technology. He received his Ph.D. in Applied Mathematics from Northwestern University in 1973. He has been a Visiting Professor at the University of Michigan, University of Copenhagen, Delft University of Technology, MIT, CWI Amsterdam, Columbia University and NYU.

His interests are in Continuous Optimization, particularly nonsmooth and large-scale problems, conic and robust optimization, as well as convex and nonsmooth analysis. Recently the focus of his research is on optimization problems affected by uncertainty. In the last 15 years, he has devoted much effort to engineering applications of optimization methodology and computational schemes. Some of the algorithms developed in the MINERVA Optimization Center are in use by Industry (Medical Imaging, Aerospace). He has published more than 130 papers in professional journals and co-authored three books: Optimality in Nonlinear Programming: A Feasible Direction Approach (Wiley-Interscience, 1981), Lectures on Modern Convex Optimization: Analysis, Algorithms and Engineering Applications (SIAM-MPS series on optimization, 2001) and Robust Optimization (Princeton University Press, 2009). Prof. Ben-Tal was Dean of the Faculty of Industrial Engineering and Management at the Technion (1989-1992) and (2011-2014). He served as a council member of the Mathematical Programming Society (1994-1997). He was Area Editor (Continuous Optimization) of Math. of Operations Research (1993-1999), member of the Editorial Board of SIAM J.Optimization, J. Convex Analysis, OR Letters, Mathematical Programming, Management Science, Math. Modeling and Numerical Analysis, European J. of Operations Research and Computational Management Science. During 2012-2014, he was the Area Editor (Optimization) for Operations Research. From February 2015 to 2017, he served as Associate Editor for SIAM J. Optimization.

He gave numerous plenary and keynote lectures in international conferences.

In 2007, Professor Ben-Tal was awarded the EURO Gold Medal – the highest distinction of Operations Research within Europe.
In 2009, he was named Fellow of INFORMS.
In 2010, he was awarded the status of Distinguished Scientist by CWI (center for mathematics and computer science, The Netherlands).
In 2011, he received the IBM Faculty Award.
In 2015, he was named Fellow of SIAM
In 2016 he was awarded the Khachiyan Prize of INFORMS Optimization Society – for lifetime achievements in the area of Optimization.
In 2017, the Operation Research Society of Israel (ORSIS) awarded him the lifetime achievement Prize.

Manlio Gaudioso was born in Naples in 1949 and got his “Laurea” degree in Electrical Engineering from the Università di Napoli in 1973. After that, he attended some post-graduate courses at the Università di Roma and at University of Kentucky. In 1976 he moved to Università della Calabria, where he has been holding a full professorship in Operations Research, since 1994 until retirement in 2019, at the Dipartimento di Ingegneria Informatica, Modellistica, Elettronica e Sistemistica (DIMES). He has also served as manager at CRAI (Consorzio per la Ricerca e le Applicazioni di Informatica), as member of the Administration Board and as President of the Committee for Economic Matters at Università della Calabria.

He published more than seventy papers in international journals in areas such as Optimization, Operations Research and Machine Learning. His research interests include nonsmooth optimization, integer programming, graph optimization, logistic chain optimization and classification methods based on separation surfaces in the parameter space.

He has been advisor of several Doctoral Dissertations and has served as Associate Editor of the journal “Optimization” and of “Vestnik of Saint Petersburg University”. He has also acted as Director of some Scientific Schools at “Ettore Majorana” Centre in Erice and he has been serving in the Steering Committee of AIRO, the Italian Association for Operations Research during the period 2015-2018. He is currently one of the five members of the national committee of the Italian Ministry of University and Research (MUR) for Scientific Habilitation in Operations Research (ASN).

Prof. Gaudioso has been elected EUROPT Fellow in 2020. 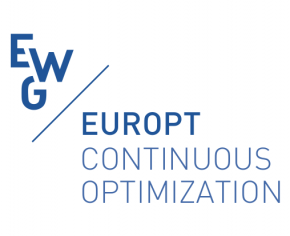